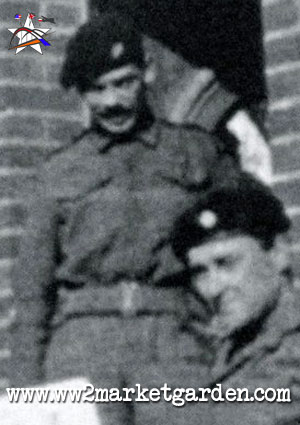 
The engineers finished the Bailey bridge in the morning of September 19. The Guards Armoured Division started moving again and built up speed linking up with the 82nd Airborne Division at Grave within a couple of hours. The bridge at Nijmegen was still in enemy hands and with the 82nd Airborne Division on the defensive in the Nijmegen sector, the tanks were a warm welcome to break the stalemate at the Waal bridges.


McRory's unit, the 2nd battalion Irish Guards drove through Sint-Oedenrode in the direction of Nijmegen on September 19. McRory's tank, which belonged to C Squadron, broke down in the middle of the market square in Sint-Oedenrode. Having major engine problems, McRory decided to wait for the brigade's workshop detail to fix the tank. McRory ordered his driver - Guardsman Murphy - to stay with him in Sint Oedenrode, while he transferred the rest of his tank crew to other tanks in the C squadron, which followed its way up the north.

On 19 September the Germans launched a ferocious attack on the lines of the American 502nd Parachute Infantry Regiment at Sint Oedenrode. Company C formed a blocking line at the 'Schijndelseweg' on the northern side of the village. The company was heavily engaged with the enemy. The lightly equipped paratroopers of company C were up against superior German forces supported by artillery, 88 mm and 20 mm guns. Lieutenant-Colonel Patrick Cassidy noticed that the company was fighting against a superior fighting force and they were losing ground fast. He remembered that there was a crippled tank in town and he asked the commander - James ‘Paddy’ McRory - for support. McRory was quick to respond in the affirmative and even though the tank was moving in a slow pace of five miles an hour they soon reached the main line of resistance. With the tank being short of crew, Cassidy ordered two of his men from HQ company to join McRory in the tank. Staff Sergeant Roy Nickrent and Private John O'Brien were chosen for this task. O'Brien sat inside the tank, acting as loader for the main gun and Nickrent rode on top of the tank, protecting the tank from infantry on the flanks as he would call out targets of opportunity. McRory quickly spotted three 20 mm anti-aircraft guns, which had been supporting the enemy attack. Before the enemy gun battery could respond to the tank's shots, all three guns were whiped out by McCrory. The Germans were only expecting infantry in this area and with McRory's tank supporting the American counter attack, the German attack collapsed. McRory spotted a German truck in a field and fired a shot, blowing the tank sky high. S/Sgt Nickrent was now running behind the tank, checking the ditches for enemy troops by firing short bursts with his tommy gun. Small groups of Germans were now surrendering to the Americans. O'Brien picked up a Sten gun from inside the tank and climbed into the turret. O'Brien and Nickrent both kept firing into the ditches, routing enemy infantry into the open fields. McRory fired the coaxial machine gun in the turret at the enemy troops killing many of them. A German marksman saw O'Brien firing from the turret and shot at him, killing O'Brien with a well aimed shot to the head. McRory pulled O'Brien's body inside the tank and ordered his driver Murphy to head forward. 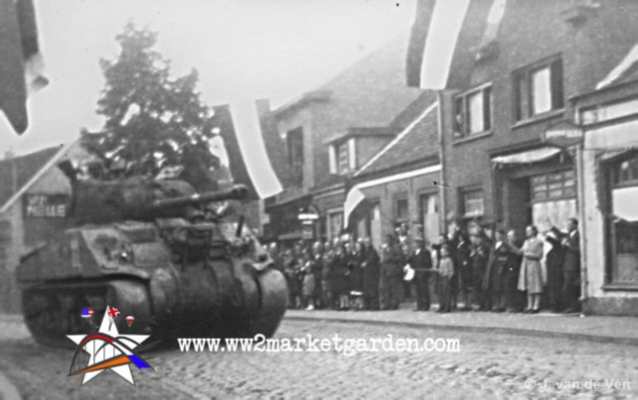 Photo: On 19 September tanks of the Guards Armoured Division were heading towards Anhem as quickly as possible. J. van de Ven, a citizen of Sint-Oedenrode, pictured tanks of the division rushing through the center of town at “Heuvel” in Sint-Oedenrode. On this picture we see a Sherman Firefly VC tank from 2nd Battalion Grenadier Guards. 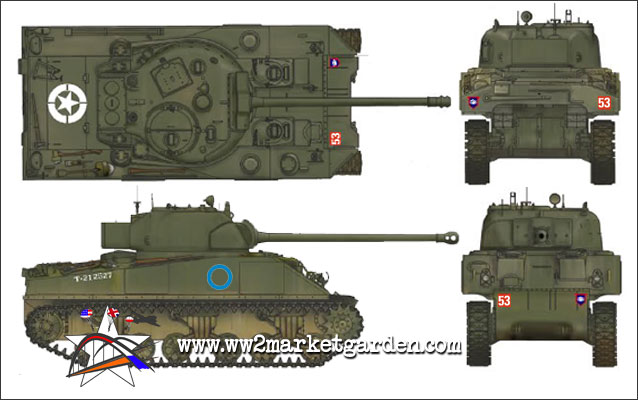 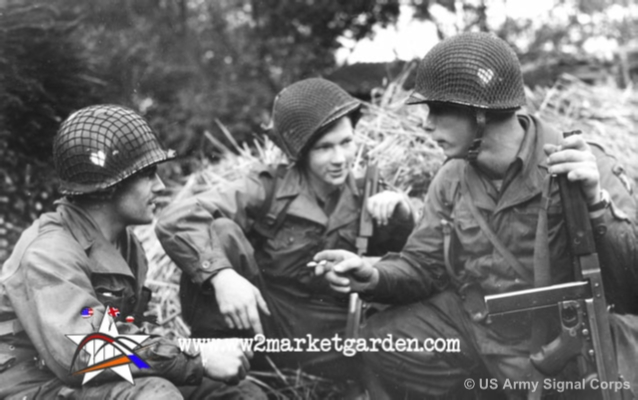 The German attack collapsed and the American paratroopers, together with McRory's tank, were able to push forward hundreds of yards pushing back the Germans towards Schijndel. In the meantime three more tanks from C squadron 15/19 Hussars arrived from Son now joined the attack, creating a sure win for the Anglo-American fighting force. With the Germans pushed back to Schijndel and the American lines stretched, Cassidy ordered his men to fall back to Sint-Oedenrode to form a defensive line.


Two days later, on September 21, Cassidy asked McRory and Murphy to help clean up the Schijndelseweg from stray groups of Germans. Without hesitation McRory pulled out and was now helped by American paratrooper S/Sgt. Stanley Czarniak, another member from Cassidy’s HQ company section. Together they were able to take out an 88 mm gun and armored car on the Schijndelseweg.


With the support of Sergeant James 'Paddy' McCrory the American paratroopers were able to stabalize the frontline again on the north side of Sint-Oedenrode. Lieutenant-Colonel Cassidy was so happy with McCrory's support, he wrote a letter of recommendation to McCrory's commander. He wrote: “His daring skill and fighting spirit was inspiring. He is a credit to his battalion, his country and the Allied armies. Should he ever decide to do so, there is a spot waiting for him in this battalion. He’s “our” boy.” 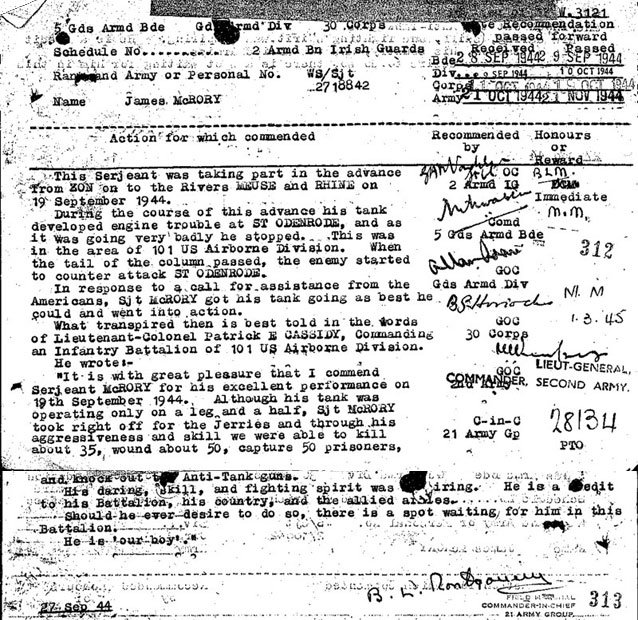 Photo: Lt-Col. Patrick Cassidy’s handwrittern letter of recommendation and the transcript as it was received by the 5th Guards Armoured Brigade.

After this engagement McCrory fought with his unit towards Nijmegen from where he would eventually fight his way into Germany. Sadly, just two weeks before the end of the war on April 24 1945, McCrory was killed in action. James 'Paddy' McCrory, aged 27, is buried on Becklingen war cemetery in Germany, Plot: 4, Row:B , Grave: 11.


From 2nd Armoured Battalion Irish Guards war diary:
“24 April 1945, More excitement during the night - Eddie Tyler seems to attract trouble!  There more Krauts got into No. 2 Squadron area with panzerfausts but were spotted in time: we killed one, wounded another, but the third member got away.  During the morning SSM McRory was killed by a shell - a sad blow to the Battalion.  All three Squadron spent the morning firing in support of the attack going in on ZEVEN.  It is quite astonishing to see how accurate the tank guns can be at these long ranges - even Battalion HQ tanks under Hugh MacDermot joined in the fun.  The Battalion is waiting for 53rd Division to come up from the South - we then get a short rest.  So far there is no sign of it.  Tony Dorman went off to hospital with pleurisy this morning.” 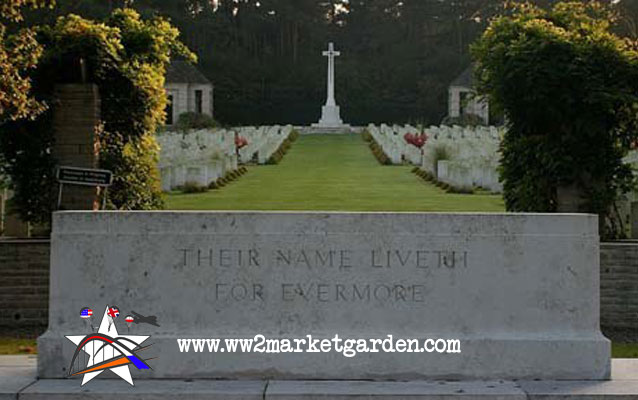 James McCrory's driver Guardsman Murphy emigrated to Australia. Just a few years after the war, he wrote a letter to the Pentagon asking for the whereabouts of Lt-Col. Cassidy. Greatly to his surprise Murphy received the following letter:

Your letter which you wrote to the Chief of Military History in Washington, D.C. has been forwarded to me for reply. I was delighted to receive your letter and will try to give you the information that you asked for.

I remember very, very vividly when your tank broke down in the village square at St. Oedenrode. I also recall very vividly the terrific job you did against the attacking Germans to the North of St. Oedenrode. As I recall, you had a broken firing pin and had to use a screwdriver and hammer to fire your main gun. I also know that your tank was a big surprise to the Germans and that many of them were slaughtered when you fired your canister rounds. For about three days your tank was one of our mainstays at various times. I recall that my operations Sergeant Pinkerton climbed up on the tank and helped you in one operation. I also remember Sgt. J. McRory getting out of the tank, and we thought he was sneaking up on the enemy, but instead of that, he pulled out his pistol and killed a pig. Evidently you must have had a good supper that night! I lost track of your tank after you moved on North. I submitted to the United States Army a recommendation for our Legion of Merit Medal for Sgt. McRory. I never received a reply as to whether it was awarded or not.

Seven years after the war I wrote to the British War Office trying to find out something about Sgt. McRory. I never received a reply. Your letter was the first knowledge I had that Sgt. McRory was killed near the end of the war. He was a truly outstanding soldier of Irish descent, whom I would have loved to have had beside me in battle. If he has any next of kin that you might know of, I would be interested in their names and addresses so that I could write to them.

At the present time I am in Korea finishing up on my second year. The first year I commanded 1 Corps (Group) which is the tactical unit on the DMZ. It‘s probably the largest Corps in the world with over 100,000 US and ROK troops in it. This last year I have been Deputy Commander of Eighth Army and have just received my order to report to Fort Sam Houston in San Antonio, Texas, as the Fifth Army Commander. Fifth Army takes in approximately fourteen States from the Canadian border to the Mexican border.

I do not have my library with me, but when I return to the States and assemble all of my household goods, I will forward to you a history of the 101st Airborne Division during World War II. It has a fairly complete account of the 1st Battalion, 502nd Parachute Infantry at St. Oedenrode, which includes a paragraph about your tank and Sgt. McRory.

I appreciate very much your letter and the descriptive sketch. I hope that I hear from you in the not too distant future. It will be some time before the book gets to you, but I promise that you will received it. The name of it is “Rendezvous with Destiny.” 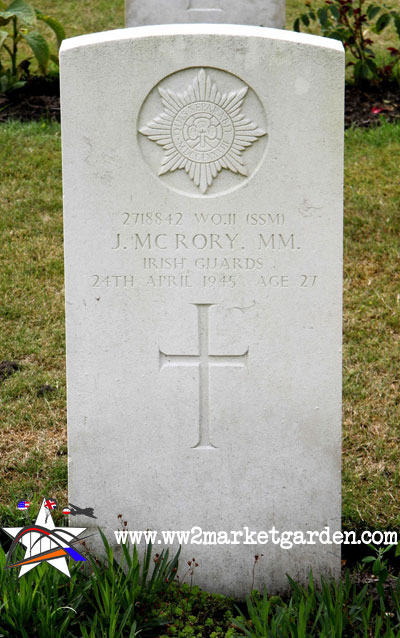 WW2 Market Garden would like to thank Frenk Derks van de Ven, Foundation Remember September 1944 and Jurgen Swinkels. You helped us giving this hero a face again. Thank you.