Bernard Tecumseh Woodland was born in Baltimore, Maryland in the United States of America. He lived in a poor suburb of Baltimore, in a (then) so called “black neighbourhood” with his father, morther and younger brother Donald. Bernard was a very smart kid and absolutely loved science. Being a young black man in segregated America at that time in history, Bernard needed to visit a ‘black school’, because colored people weren’t allowed to attend a ‘regular’ school. Being a poor but smart kid, Bernard didn’t have the luxury to attend a ‘regular’ university and eventually ended up on Coppin Teachers College. A school where Bernard was able to become a teacher. Not his first choice, but sadly, with no money to travel to another college, his only choice.

This didn’t make Bernard stop. He attended Coppins Teachers College and was fairly succesfull. He was a great student, good with kids and in a most cases smarter than his teachers. Bernard was able to explain the most difficult topics in a way that anyone who’d listen would understand. On Coppins Teachers College he experienced a new limitation. In his final year of College, he got a negative and binding advice from the school board. During a classroom visit earlier that year, Bernard outsmarted the school’s super intendant. The school’s super intendant was a white man and was known for his hate for black people. Bernard getting a negative school advice might have something to do with his experience with the super intendant… 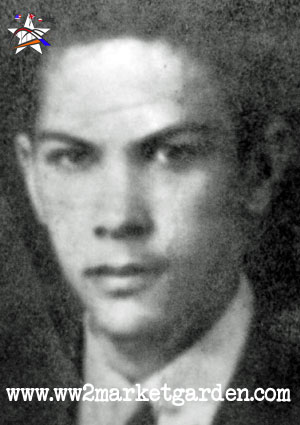 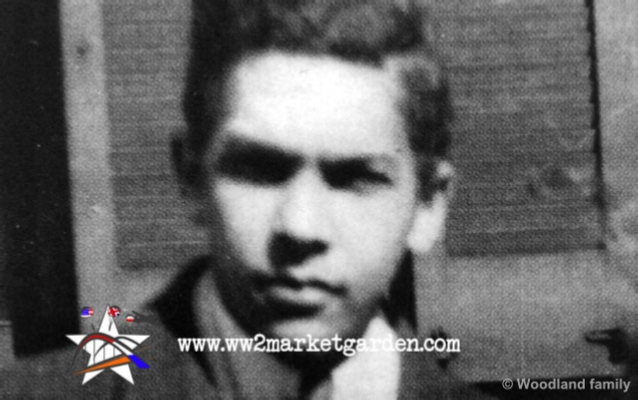 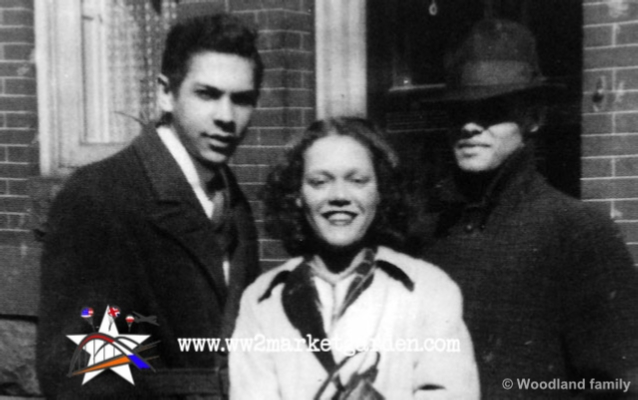 Bernard Woodland together with Charles Mason (right), his boyhood friend. Together they attended Coppin Teachers College. 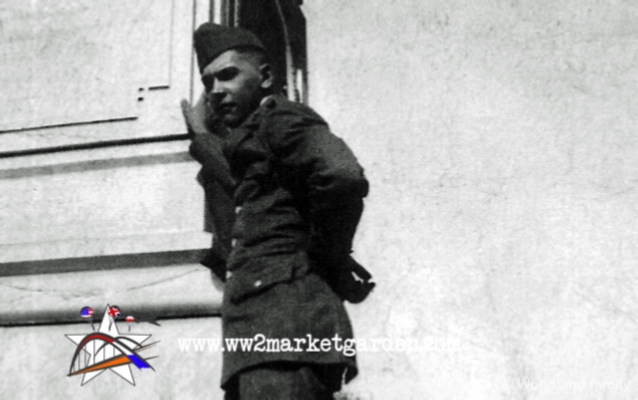 With Bernard not being able to become a teacher after his final year of college, he makes a drastic decision; he volunteers for the army. Barney aimed high, he wanted to be with the best of the best. He wanted to get an active role in a fighting unit and show everyone what he was worth. Knowing that black people in the army were treated inferior to white people and were assigned to the worst jobs in the army, he forged his documents. Bernard changed his birth certificate, transcripts and resume, chaning himself from a young black man into a young white man. Bernard volunteers for the paratroops, is trained at Fort Benning and earns his wings. Bernard becomes a paratrooper and is assigned to the 307 Airborne Engineers Battalion.

The 82nd Airborne Division sets sail for North Africa and disembarks in Casablanca. The division is moved from place to place and ends up in Tunisia where the men of the division train for their next assignment. Bernard doesn’t like Africa or as he would say; “What a dump! What a dirty hole! I wouldn’t trade all of Africa for one town in the states.”

Bernard probably missed the invasion Italy, which started by landing on Sicily. But Bernard would participate in Operation Avalanche, the allied landings of mainland Italy at Salerno. Bernard made his first combat jump and together with the men of his regiment protected the Anzio beachhead. At some point during the regiment’s actions in Italy, Bernard is wounded and ends up in hospital where he stays for a couple of weeks. When the regiment is taken of the line, Bernard relaxes with his buddies in Italy and he eventually ends up in Naples. Somewhere during his time in Italy, Bernard is transferred from the 307th to Company C of the 504 Parachute Infantry Regiment.

In the beginning of 1944 the 82nd Airborne Division is shipped to the United Kingdom to prepare for a mission in Western-Europe. The 504 PIR is held back from Operation Overlord (better known as D-day), because of the high amount of casualties the 504th suffered in Italy. While the 504th regains strenght, Bernard’s daily routine contains a lot of training and hanging around the army base. One of the best things Bernard really enjoys is candy. He askes his younger brother Donald for candy all the time through letters and Donald is able to scrounge candy bars in the United States and sends them to Bernard. Bernard and Donald converse quite a lot through letters. Donald has joined the army too and played the same trick on the army as Bernard, changing his race from ‘black’ to ‘white’ on the enlistment forms. Donald also wants to be in a parachute infantry outfit just like Bernard, but Bernard tries to convince his brother not to involve himself in a frontline unit and stay in an outfit back at home.

On 17 September 1944 Bernard’s regiment is swung into action again. After a lot of R&R, the regiment will now be put into action during Operation Market Garden, a large scale airborne assault which takes place in the Netherlands. Bernard’s regiments will fly from England to Overasselt where they will jump from an airplane onto dropzone O (Obo) and conquer bridges over the Maas and Maas-Waal canal. Company C, Bernard’s company, was used to conquer a bridge over the Maas-Waal canal. The 504th was pretty succesfull taking the bridges, the Grave, Honinghutje and Heumen bridge were taken intact.

On September 19 the 504 PIR met XXX-corps in Grave, the link-up was realised. With Nijmegen still in enemy hands the commander of the 82nd Airborne Division, General James Gavin, thought of a daring plan to seize the bridges at Nijmegen over the river Waal. He wanted to use two battalions of the 504th to cross the Waal by boat and attack the railroad and roadbridge from the north, while the other battalion of the 504th, together with a battalion from the 505th and tanks of the Irish Guards, fought for the south side of the bridges. Bernard’s battalion was chosen to cross the river Waal, a very dangerous assignment of which Gavin knew would inflict heavy casualties on the regiment. But Gavin was willing to take the risk for the Nijmegen bridges and to create a bridgehead over the Waal so the link-up with the 1st Airborne Division at Arnhem and Oosterbeek could still be made.

On September 20 the 504 PIR was ready to cross the river Waal. After a couple of postponements the river crossing was a ‘GO’ and the mission started at 1500 hours (3 p.m.). Bernard and his buddies from Company C were in the third wave of the Waal crossing. We know that Bernard survived the Waal crossing, but he was wounded on September 21 while defending the bridgehead from enemy attacks. Bernard was taken of the line and sent to a hospital in Belgium where he died of his wounds on September 24. A Red Cross nurse, who was a friend of Bernard, informed Bernard’s brother with a letter. She had promised Bernard to inform his brother if anything bad happened to him. She kept her promise. 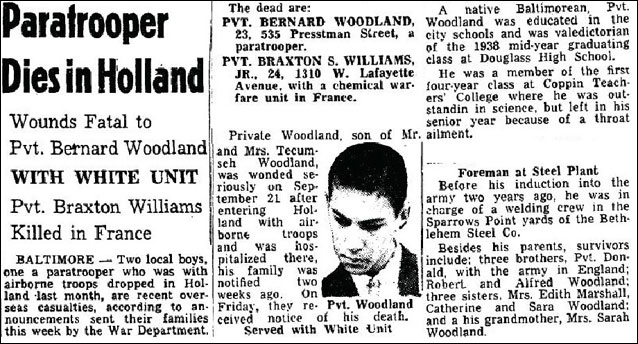 Newspaper: this news clippping was taken from a Baltimore newspaper. Notice how Bernard is described being a member of a ‘White unit’.

Photo: The inscription of Bernard’s name on the Waal crossing monument in Nijmegen.

Photo: Bernard’s grave at Henri-Chapelle war cemetery in Belgium. Bernard’s grave is adopted by a friend of the webmasters, Martijn van Haren, who hosts a tribute page about Bernard Woodland at ‘Faces Beyond the Graves’. He is buried at Plot H, Row 2, Grave 63. Donald’s brother became a member of the 101st Airborne Division and fought with Company F 502 PIR. He  wrote his memoirs after the war but passed away before he was able to finish it. Donald’s son Bernard, named after his uncle, finished the book and made it accessible online: To serve with honor. 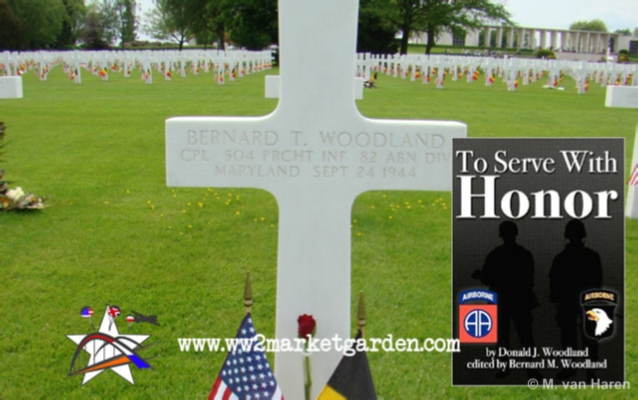