William ‘Bill’ Galbraith was born and raised in Southern-California and enlisted in the US army on September 9th, 1942 in Long-Beach California. He was sent to Fort Mac Arthur, where he enlisted for the Marines. The Marines declined him for being colorblind. After being turned down, Bill decided to join a newly created fighting force, the paratroops. From Fort Mac Arthur he was sent to Toccoa, Georgia. That is where he was assigned to Company I of the 506th PIR. The 506th PIR was an experimental unit of paratroopers. Where the other regiments consisted of men drafted from the army, the 506th PIR consisted of volunteers recruited from civil life. Bill was lucky enough to make the cut, because Company I was the last company to be formed in the 506th PIR.

Bill received intensive training at Toccoa and was finally trained as a .30 cal light-machine gunner. From Toccoa the regiment was moved to Fort Benning. This is where they received their parachute training. Bill made his five qualifying jumps at Fort Benning and earned his parachute wings. Now he could officially call himself a paratrooper. The men of the 101st Airborne Division received further training at Camp Mackall. Here the division was prepared to invade fortress Europe.

In September 1943, the regiment was transported from Camp Mackall to New York, from where the 506th PIR regiment was shipped to England together with the rest of the 101st Airborne Division.

Finally, after months of training, on June 5th, Bill would find himself on Exeter airfield, where Company I boarded their C-47 Troop Carrier planes for the invasion of Normandy, France. Bill’s company was one of the last companies to jump into Normandy. Sadly, his company was misdropped over France, just like the rest of the battalion. Bill landed close to Saint-Come-du-Mont where he met up with 1st Sergeant Paul W. Garrison, also a member of Company I. Garrison had injured his ankle on the night jump into Normandy and Bill decided to stay with him. Finally the two men met up with a large group of paratroopers from the 501st PIR. They joined this fighting force at a spot which was later called ‘Hell’s Corner’. After intense battle, when things calmed down a bit, Bill and Sgt Garrison were finally able to rejoin their battalion again. On June 13, third battalion participated in a large offensive executed by the 101st Airborne  Division. This action is known as the ‘battle for Bloody Gully’. During the attack Bill served as a light-machine gunner, covering the attack. Bill got out of Normandy unscaved and returned to England with the division. 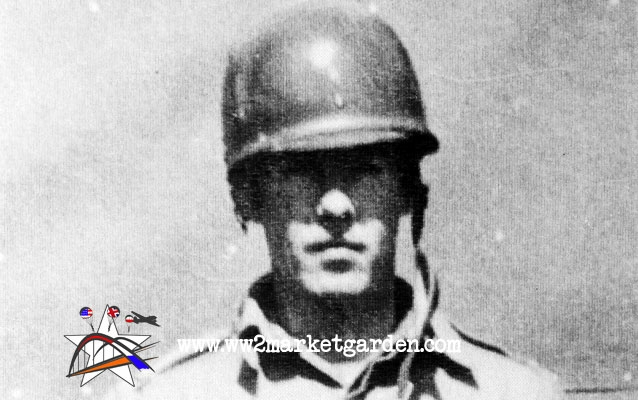 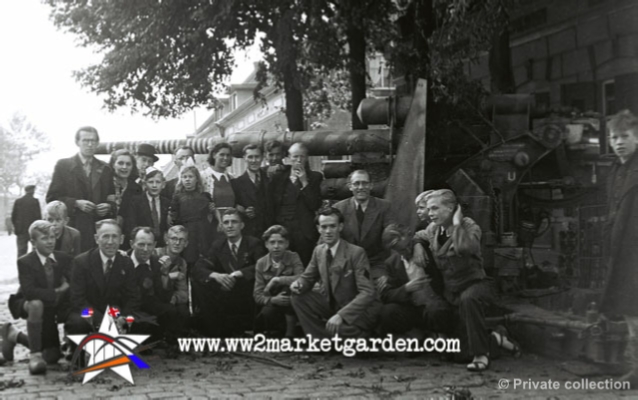 One of two 88 mm guns that fired down the Woenselsestraat and Kloosterdreef at the advancing troops of the 506 PIR. This gun is most probably the one that wounded Bill. 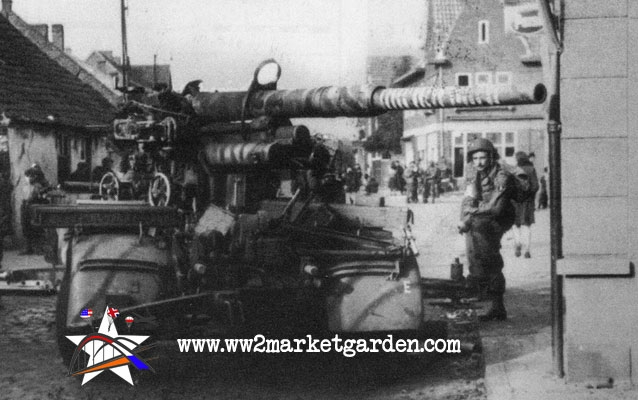 Sanatorium “Holy heart of Jesus” in Son, the Netherlands. Used by the 101st Airborne Division as a hospital during Operation Market Garden. Bill’s wounds were treated at this facility. 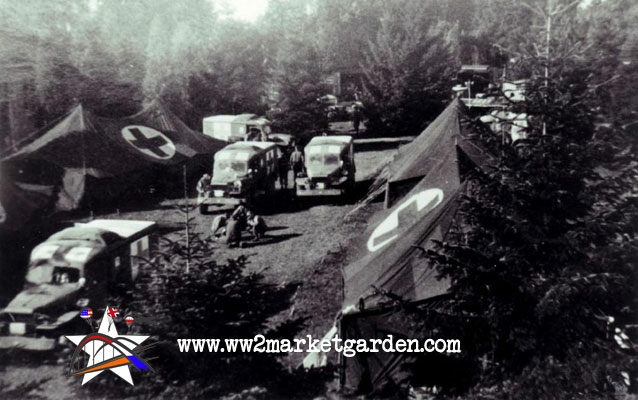 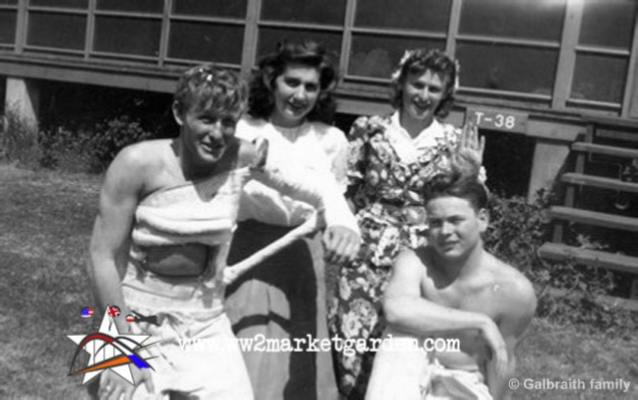 Back in England, Bill was promoted to Technician 4th grade and assigned to HQ-3-506 PIR’ S-3 section, serving under Captain John Kiley. Bill wasn’t able to enjoy his newly acquired rank for long. When he was on leave in Scotland he missed his flight on a B-17 bomber and was busted back to private on return.

After a short time in England, the 101st Airborne Division prepared for another Airborne invasion in the Netherlands, called Market Garden. Bill jumped into the Netherlands as an acting Sergeant for the S-3 section of third battalion on September 17, 1944.

3-506 PIR jump out of their C-47’s over the Son DZ. The jump went well with most of the battalion assembled on the side of the dropzone within an hour. Third battalion followed second battalion into Son with the goal of capturing the bridge over the Wilhelmina canal. After a short but fiersome fight, the battalions reached the bridge, but before they were able to capture it, the bridge was blown up by the enemy. Second and third battalion crossed the makeshift bridge at Son, created by the 326th Airborne Engineers Battalion, while first battalion stayed behind in Son.

The next morning, September 18, third battalion was the leading element in the attack on Eindhoven. Bill, together with Captain Kiley and the S-3 section, reached the church on the Vlokhovenseweg. Captain Kiley saw that Company H lagged behind in the attack and ordered Bill to find a radioman and let Company H know that they had to speed up. Bill got the job done and returned to Captain Kiley. Kiley stood up behind a burning German half-track and Bill warned him that if he didn’t stay low he would get shot. Captain Kiley answered Bill by saying: “If I get down, so will everyone else.” He just finished his sentence when a shot was fired, hitting him in the neck. Kiley died instantly. Bill was shocked by this death scene and fired shots towards the church and some houses on the opposite side of the road. He then asked to join Company I in the attack. He walked through the streets together with the rest of the battalion, clearing house by house. Finally the battalion reached the Woenselsestraat. This is where Bill and the battalion encountered two 88mm guns which were placed on the Woenselsestraat and the Kloosterdreef. One of the guns was firing down the street. The first round exploded close to Bill and shrapnel struck his leg, blowing him of his feet. The second shot fired by the gun exploded close to Bill again, now wounding his shoulder. He tried to get out of the line of fire and reached a door. The door opened and a Dutch local, Piet Klompemaker, dragged Bill into his house and tended Bill’s wounds.

Eventually medic Alvin ‘Bill’ Kidder found Bill and dressed his wounds properly. Bill was sent to the Sanatorium in Son, where the 326th Airborne Medical Company had set up a hospital. Bill received surgery the same day and woke up a day later. 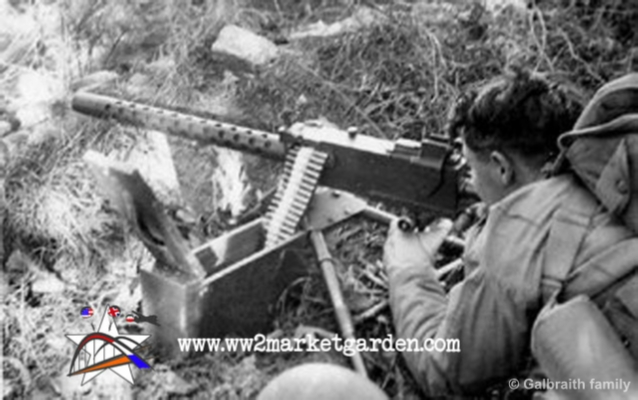 Photo: Bill firing a .30 caliber machine gun during training at Camp Mackall  in the United States.