Operation Market Garden started for the 101st Airborne Division with the drop on the Drop-and Landing zones in Son. Vincent Laino belonged to the small group of Company C, 326th Airborne Engineers Battalion, who was sent to the bridge at Best. The Airborne Engineers were supporting Company H (502nd PIR) and a small detachment of the light machine gun section (C-326th AEB). After 2 days of tough fighting at the bridge, Vincent Laino was among the few survivors.

Vincent Laino was a machine gunner and carried a .30 caliber Browning machine gun. According to his buddies, Vincent was really good with the LMG. Adam Slusher, a fellow Company C Engineer said that during their time at the bridge, Vincent took out at least 75 German soldiers. He recalls that just after the bridge was blown, Vincent took out 7 Germans and a munitions truck that was close to the bridge. At one time Vincent Laino, Lawrence Koller (H-502) and Tony Waldt (H-502) moved towards a big crane alongside the canal and returned to their positions with three German medics and a wounded officer. The German medics took care of the wounded in Wierzbowski’s group.

On the morning of the 19th, the Germans launched a new attack on the small group of American paratroopers at the bridge. Lt. Wierzbowski saw the Germans coming and ordered his men to throw grenades at the incoming force. Sadly, the Germans had the same idea and grenades were already hitting the lines of the paratroopers. Some grenades just blew up on the edges of the foxholes, but one other landed in front of Vincent Laino’s face. Vincent Laino survived the blast, but got wounded in the face. Laino yelled for a medic, but the medic was too occupied with another wounded soldier. SLA Marshall writes in Battle at Best:

Then the men saw another grenade loop over Wierzbowski’s head, hit Laino on the knee, and roll off into his foxhole. They saw Laino, blinded as he was, reach down groping for it, and while they had their split-second agony of suspense, his hand found it and tossed it out, just before it exploded in mid-air.

Finally the attack ended and Lt. Wierzbowski ordered his men to surrender. The Germans brought the men to the German first-aid station at the Speelheideweg. One of the German medics who was captured by Vincent Laino near the Best bridge took care of his facial wounds. Eventually the group of American paratroopers were able to escape back to allied lines. Vincent Laino survived the war and returned to the United States. For his actions during the battle of the bridge at Best, Vincent Laino received a Silver Star, for his wounds a Purple Heart. 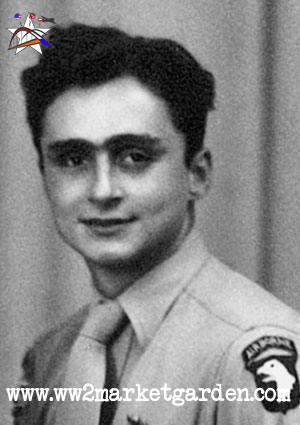