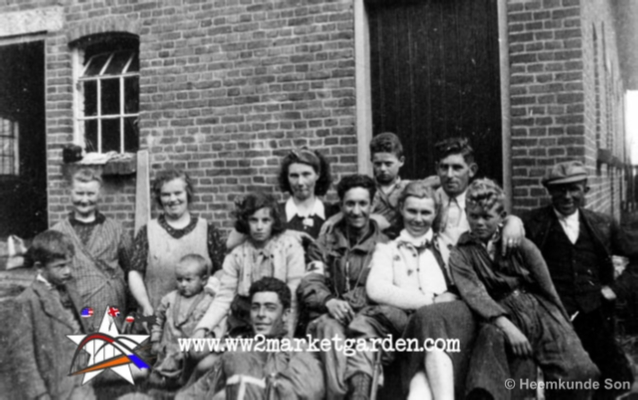 September 17 is an unforgettable day for me and my family. That Sunday in September didn’t start of as it used to. We didn’t visit mass because pastor van Hussen warned us on Friday that the Germans would take the women for labor work at the airfield in Eindhoven. The men would have to dig trenches. So we decided to stay at home and take care of family van Dinther, who fled their house with six children on September 14. The oldest child was 11-years-old and the youngest 1,5-years-old. Our father once said that the English would liberate us one day, how they would do that wasn’t really clear for us. That Sunday we were preparing lunch when suddenly we heard planes outside. It was about 11.00 hours when we heard airplane engines roaring over the fields. The airplanes came from the direction of Best and started strafing and bombing the woods south of our house. Later we understood that these planes were securing the drop zone for the paratroopers who would jump over the fields behind our house. At 11.30 hours we learned that our neighbor, Kees Coppelmans was hit and died during the strafing runs. My sister Dora went towards the place where Kees was hit to see if she could be of any assistance. Piet and Cor, who were kept in hiding at our house from the Germans, went along with her. They wrapped the body in a blanket and brought it to the Sweren family, who also lived in the Sonniuswijk. The father and daughter of the Coppelmans family were retrieving the cows from the field, but they  got wounded too during the strafing runs and two cows died.

At about 12.30 hours we sat at the kitchen table eating our lunch, when dad picked us up and sent us to the air raid shelter, which was made by my father in the orchard underneath an apple tree behind our house. My father, Piet and Cor stayed behind in the house. We didn’t know what was going on, but we trusted our father’s judgement. Just minutes later we heard airplane engines and anti-aircraft fire, something special must be going on. Looking from the air raid shelter we could see colored parachutes floating above our barn. We prayed to the Lord that he would keep us safe. We knew the British army had crossed the Belgian border so we thought the noise had something to do with the Germans stopping them from reaching Son. As we sat in the air raid shelter, suddenly we heard boots just a few feet away from the entrance. The only thing we were thinking of was that when we would leave the shelter, we would be facing the barrel of a gun that would make an end to our life. My sister and I embraced our mother tighter and tighter. A few minutes later Piet came to tell us that American soldiers were landing in the fields behind our house. Piet gave us some chocolate and cigarettes that he got from the American soldiers. This was a relieve to us. At about 14.30 hours we left the air raid shelter and we were surprised to see that a parachute was draped over the roof of our shelter. One of the soldiers must have landed on top of the shelter. That is probably why we heard the footsteps of a soldier. When we entered the barn we saw three wounded American soldiers on the ground. One was heavily wounded, two had minor injuries. We were struck by this scene and I can’t express in words what I felt when I saw these men. Worst thing was, we couldn’t express our feelings to these men, because we simply didn’t speak their language. Later we understood that the American medics needed bandages, we solved that by giving them some old blankets and some other things we could find. Hour by hour, more wounded men were brought to our farm. When Dora and I went outside to see what was going on, we saw that the Americans had set up a first-aid-station at the back of our farm. The Americans put sentries on both sides of the house. With sign language they made clear that Son would be clear of Germans soon. We were very worried about our brother Bertus, who left for Schijndel in the morning by bike to visit his fiancé. But luckily he returned home at 17.00 hours. This must have been a big relief to our parents. It was a day with mixed emotions. We didn’t really understand what was going on and what the war was about, but now war was all around our house. At about 0.30 hours I went to bed, but I didn’t get much sleep because I was thinking of all the things I’d seen during the day. When we got up in the morning more wounded men were brought to the barn. We were surprised to see how relaxed  these men were. Even the wounded were really calm and they received great help from the American medics. How could they still be so friendly while they were lying there on the ground wounded? It was truly disappointing that we couldn’t talk with these men.

My sister Dora and I did our daily routines, milking and feeding the cows, doing our chores inside the house. When the soldiers asked for our help we helped them. They sure needed a lot of hot water, so that’s what we got. We boiled water and brought it to the medics. With our farm being a first-aid-station, a lot of people from Son came over to have a look at what was going on. It was a beautiful sight walking around our farm with all the colored parachutes and people talking to each other. There were a lot of parachutes. Just an example. On two acres of land we counted 96 parachutes. During the afternoon of the 18th more soldiers were landing in the fields behind our house. We saw a lot of soldiers coming from gliders. The fighting around the house wasn’t so intense as the day before, probably because it was foggy. In the night of the 18th, more wounded were brought to the farm and in the morning of the 19th, the Americans started to evacuate the wounded. It was a terrible sight to see. All those wounded men who came from so far away to liberate our country. Two barns were full of wounded, it must have been about 50 to 60 wounded men, maybe more. I felt sorry for them and my mind was full of grief. The wounded were evacuated to the Sanatorium in Son where the nuns would take care of them. It must have been a great relief for the men that they finally could receive the treatment they deserved and longed for so much.On a side note I would like to mention that there were two German soldiers in between the group of wounded. When we entered the barn they looked at us with angry eyes, as if they were blaming us for betraying them. As if we were traitors. I never forgot the look on their face. In the afternoon of the 19th a lot of commotion started within the group of soldiers at the farm. They made us clear that we couldn’t make any light during the night, because the thought the Germans were going to bomb the farm. We thought it was better to bring the van Dinther family and my mother back to Son. Dora and I would follow later when we had done our chores. That same afternoon, more supplies were dropped and landings took place in the fields behind our house. An air- plane crashed just a few hundred yards from the farm and burned out. We saw a paratrooper landing his chute in the middle of the burning plane. We wanted to help the soldier but the other soldiers pulled us back because it was too dangerous. When we wanted to leave for Son later in the evening, we were stopped by the American soldiers. We weren’t allowed to go, because now they thought Son was going to be bombed. We stayed at the farm with our father Bertus, Piet and Cor. But the agonizing thought of not having our mother in our midst made us feel terrible. We didn’t get much sleep that night, especially when we saw tracer fire close to the canal at Son. We understood that it wasn’t Son but Eindhoven that got bombed by the Germans. The next morning our father went to Son to see if he could find mother. At noon he returned home with mother and the van Dinther family. Mother and the van Dinther family didn’t stay at Son, they couldn’t reach it the day before, so they stayed over at miller van de Hagen.  With all these American soldiers around us we felt safer every day. Still wounded were being carried inside the barn for treatment. Quickly they were transported to Son. To this day I regret the fact that I didn’t write down any names. I don’t know who these men were who resided at our farm for so many days.

September 20 was a quiet day. Some wounded were carried in during the night, but they were brought to the Sanatorium almost immediately. On the 21st the Americans cleaned up the place and left for Son. It almost looked as if nothing had happened here last few days. They told us we had to stay inside and not stand in front of the windows . At about 10.30 hours we heard gunshots in the distance. Soon the Americans returned to the farm, this time not with wounded men but with German prisoners. They brought about 50 of them, kept them at the farm for a while and later marched them to the football fields in Son. I remember one incident where two American soldiers were marching 35 German soldiers towards the football fields. They were walking on the Sonniuswijk road (the main road in front of our house). One of the German soldiers tried to flee. He jumped over a ditch but couldn’t make it to the other side and slid back into the ditch. When he tried to climb out one of the American soldiers fired his rifle hitting the German in the back of his head. The other German soldiers must have taken this seriously because from that point on they marched with their hands up even higher. In the afternoon of the 21st the van Dinther family went back to a now liberated Son. The fighting stopped and the American soldiers cleaned up the farm. The Americans left for Veghel and we would never see these brave men again. I would like to finish my story with a big ‘thank you’ for our American liberators. With mixed feelings and emotions we look back on the four days in September 1944, when the American soldiers worked at our farm. I hope the men that survived the war had a nice life! Take care! 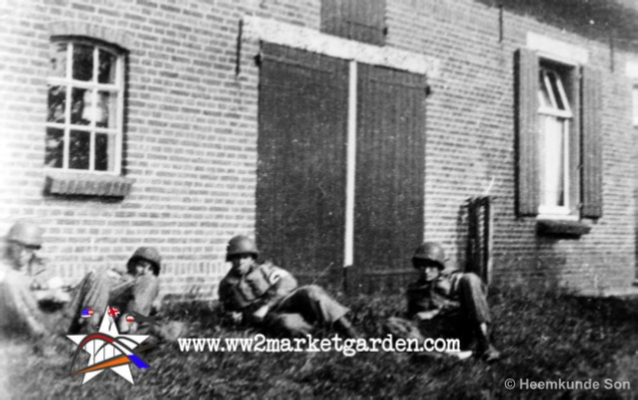 The American medics relax for a few moments before the wounded arrive at the Roefs farm. 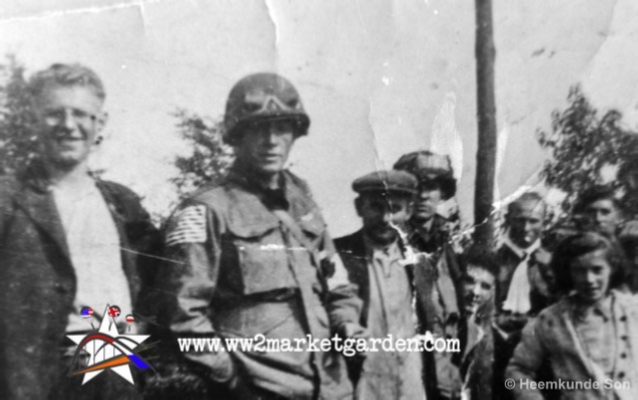 The citizens like to pose for pictures together with their liberators. On the right side of the picture we see members of the van Dinther family and Cor Wilbers. 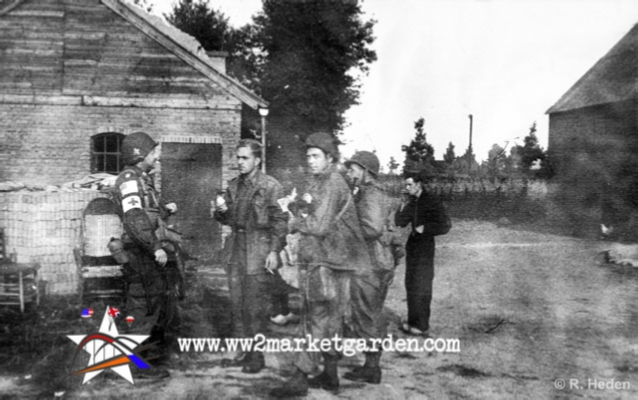 An officer of the 326th Airborne Medical Company, Captain Saul Dworking, talking to three glider pilots. Cor Wilbers can be seen in the black coverall on the right. 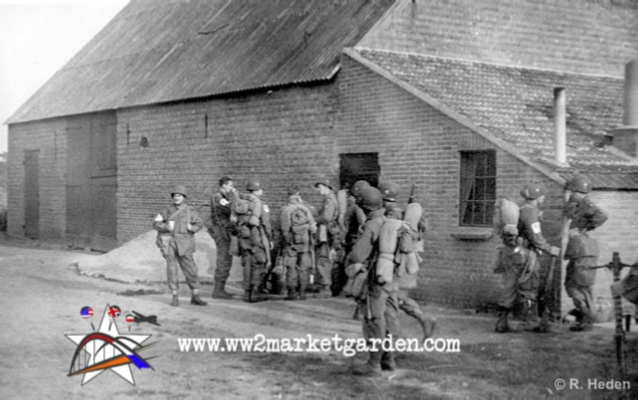 In the afternoon of the 18th, men of the 327th Glider Infantry Regiment landed on Landingzone-W righ behind the farm. Berta arranged a pitcher of milk and some apples for the men. 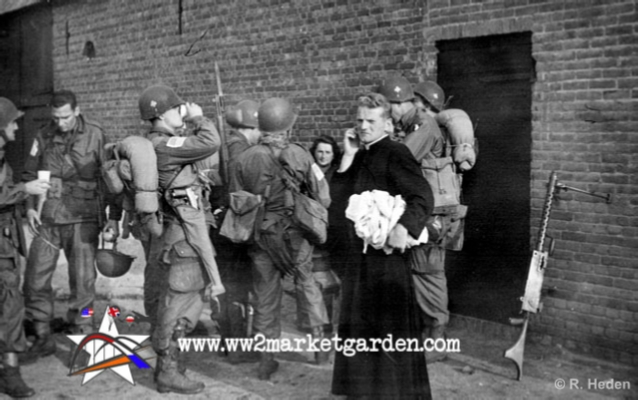 Priest van Dinther came from the center of Son to visit his family members at the farm. He collected a parachute from the dropzone.