John enlisted for the US army on July 6th 1943 and joined the paratroops. Like many other Americans, John joined the army after Japan attacked Pearl Harbor. After qualifying to be a paratrooper John got assigned to Headquarters (HQ) 501st Parachute Infantry Regiment.

In September 1943 the 101st Airborne Division was sent to England where the division would prepare for the invasion of occupied Europe. During the planning stages of Operation Overlord (better known as D-day in history books), John got assigned to a special section which would create the movable and static sandtables for the paratroops. These tables were used for learning purposes. On the tables, full scale models were made with towns and fields on the table, transferred from aerial photographs and maps. With these tables, the regiments of the 101st Airborne Division was able to familiarize with the terrain they would land, on the day of days.

Having this job, John had a lot of knowledge about the operation and had access to places where even high ranking officers weren’t allowed. Knowing all these details and ‘secrets’ of the operation, John wasn’t allowed to jump into Normandy with his regiment. If he was captured by the Germans, the operation could be jeopardized.

John’s first combat jump took place in the Netherlands, during operation Market Garden. He was assigned to jump with 1st battalion which was supposed to land just outside Veghel, but due to the crash of the pathfinder team in Retie Belgium, the battalion was misdropped at Heeswijk-Dinther, close to the castle. He was in the best shape of his life, weighing over 150 pounds and with all the equipment which he carried on his body he weighed close to 300 pounds. John had a hard landing and was knocked unconscious because of the impact. His shute landed right on top of him, so the other paratroopers didn’t notice him lying on the ground when they were assembling to go to Veghel. When he finally woke up he walked up to a farm and was welcomed by the locals. Eventually John found his company and stayed in Veghel for a couple of days before moving to Eerde, where the fighting became very intense.

Being a member of Headquarters wire section, his job was to lay communication wires in between headquarters and the companies. This was a dangerous job! Although protocol said a wire patrol must consist of 2 wire men and one rifleman for protection, reality was that John was laying miles and miles of wire through enemy lines all by himself.

On October 4th, the 501st left Eerde and was brought to an area in between the Rhine and Waal river, called the Island. Here, the 101st Airborne Division was used as regular infantry, defending the Island from German attacks.

After leaving the Netherlands, the division was sent to Mourmelon-le-Grand, where the division could rest and refit. But, in the middle of December the Germans launched a new attack in the Belgian Ardennes. The 101st Airborne Division was rushed towards Bastogne, to stop the Germans from taking this city with seven important roads leading into town. During his time in Bastogne, John resided in the seminary, close to the church and the headquarters of the 101st Airborne Division. On January 5th, a couple of paratroopers resided in the courtyard, when a pile of about 300 mines exploded. The mines were stacked against the wall in the courtyard of the seminary. John’s best friend, Private Walter Craley  was killed in the explosion. It is not sure if the explosion was caused by a direct hit or by the sheer weight of the stack pushing on the bottom mines. John was heavily demoralized by witnessing the event where his best buddy got killed. In the upcoming days, John would frequently visit the church across the street. One day, John was standing inside the church, and light was projected in through a hole in the roof. The sunlight hit him and he got a warm feeling. Then suddenly it felt like someone was holding him, in a warm embrace, and he heard a voice saying: ‘you’re going to be alright.’   After Bastogne, John traveled to Mourmelon-le-Petit to rest and refit, before serving time in Germany and Austria. When the Germans finally surrendered in the beginning of May 1945, John was in Brussels on leave. After the surrender, John wasn’t allowed to return home with the 501st PIR, because he didn’t have enough points. Therefore he was transferred to HQ-502 PIR and Served with them until he returned home a few months later. 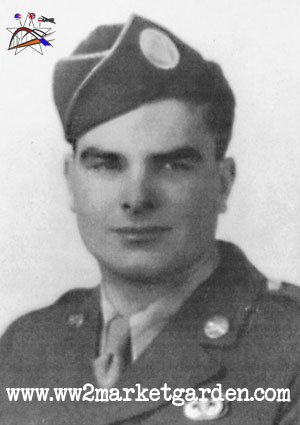 As John would say:  “war is hell”, even though John has fond memories of his time in the service. He has made friends for life. John always hated the fact that some paratroopers thought that paratroopers who served in Headquarters units always resided in the rear, not participating in the action. Even though he was on the frontline with his wires more often than any other in the regiment. Years after the war, John met Bobby Hunter from Company D 501 Parachute Infantry Regiment. Bobby asked John in which company he served so John answered Headquarters. Bobby laughed at John and ridiculed him that he must have been in the rear, sleeping in blankets instead of a foxhole. John got so mad and told Bobby what he really did, especially in Bastogne, walking through the woods, all alone, through enemy lines, laying wire to the companies. Since that day Bobby accepted him and they have been really close friends ever since.

John returned to the Netherlands often and he made many friends on both sides of the Atlantic. During one of his travels he met Cailin Casey, a student from the “College of the Ozarks”. She decided to write a book about John’s life and his time in the service titled: “Down to the wire”. 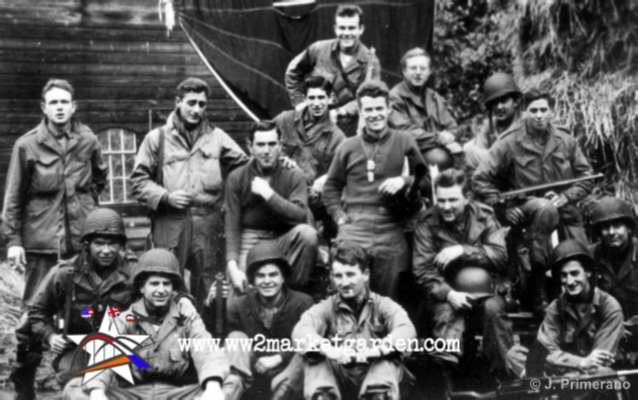 Photo: taken on the farm on the Bergweg in Eerde, the Netherlands. Just a few days before the division moved to the area called “the Island”. The wire section slept inside this barn. To make sure nobody else would use the barn, the wire section put a dead cow inside. They guessed no one else was able to withstand the smell. Eventually they got used to the smell so they had a warm and dry place to sleep at night. Top row: Charles B. Bonner, Arthur L. Worsham, Emmett D. Bradley, Unknown, William Roberts, Harold J. Arnold, Lyle G. Hankins, Chester Stolarak, Harold J. Thompson and John E. Funk. Bottom row: Unknown: J. Royals, John Primerano, George H. Childs and Ivan Ladany. (Courtesy John Primerano)