A lot happened in the days leading up to September 17 1944. In the day and during the night, in the air or on the ground. Long rows of retreating German soldiers with few supplies, walked through our village. Many soldiers drove on a confiscated bike. We were evicted from our house by the Germans, now living in a hotel/café in the center of Sint-Oedenrode. I was 11-years-old.

Especially Sunday the 17th – a beautiful day – they sky was full of movement. The atmosphere was tense. Then suddenly we heard the roar of airplane engines. Big planes with gliders attached flew towards the fields at Son. Something was dropped from the planes, it looked like a stream of colorful balloons. Later I realized that it were paratroopers.

Then all hell broke loose and we went into the air raid shelter. Typhoons and Spitfires flew over the roofs of the farms. We heard hard pop’s of the Anti-aircraft guns and grenades. A constant rattle of the German machine gun positioned near our basement window.

We spent some time in the air raid shelter, waiting till it was calm again. At about 1800 hours we went outside to discover that there were a lot of men at our farm. Big guys with loads of equipment, guns drawn. These men belonged to the 101st Airborne Division, Americans! People in the neighborhood knew that my dad spoke English, so they picked him up to help out a neighbor. In his enthusiasm he went outside with his rifle, but the Americans soon put him against the wall as a prisoner. A minor mistake. The German soldier on the machine gun lay dead in a pool of blood next to our basement window.

A few hours later when the area was under control, a few Americans came inside our house. One drew some characters on a piece of paper, Mickey Mouse and some others we had never seen before. Some even wrote down their address and I received a couple of pictures. Another soldier played a tune on the piano, a jazz version of ‘Silent night, holy night’.

The soldiers couldn’t stay with us at night. The atmosphere got tense again in the following days, so we stayed in the air raid shelter. Jeeps with four men each, went towards Diependaal and Boskant. When they came back with three soldiers and we asked what happened, they shrug their shoulders. The fighting was going on and on. After a while we could even hear the difference between American and German fire.

We heard awkward stories of what happened in town. Collaborators were collected on the market square, people were mistreating them. A Dutch officer told my dad that the English tanks were held up at the Son bridge. But, Tuesday morning the first tanks entered Sint-Oedenrode and people cheered. Although the fighting would continue for a while, our village was saved. And what had happened, would be stuck in my mind forever. 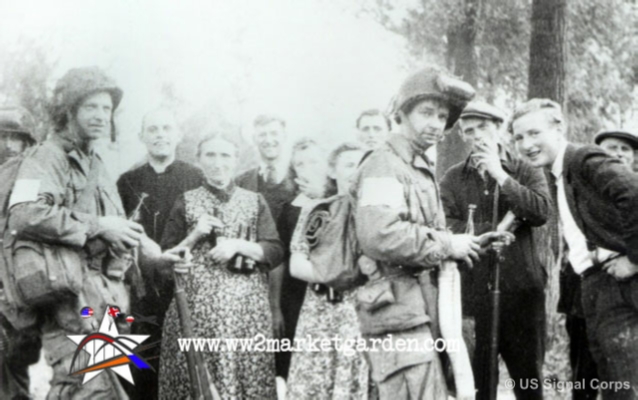