Lester Alonzo Taylor was born September 24, 1917 in Lawrence County, Tennessee, to rural farm parents. He grew up with three brothers and four sisters and then there was one little sister (the author) born after he left home as an adult. Lester and his parents and siblings moved to California in 1937 and the family stayed there only two years before returning to Tennessee. Lester remained in California to work.

At the age of 24, on January 30, 1942, he enlisted in the U.S. Army from a home address of “Presidio of Monterrey, California”. This is a lodging facility for military personnel His assigned ID number being 39087876.

When the Airborne recruitment began at the Army bases around the country, Lester, as many others, was intrigued by the offer of an additional 50 dollar per month to be a Paratrooper.  Initially, he was in the 82nd Airborne Division., however, when the 101st Airborne Division was formed, half of the 82nd went into the 101st . He completed jump training at Fort Banning, Georgia, then went to Fort Bragg, North Carolina, as a Private in Item Company, 3rd Battalion, 502 PIR, 101st Airborne Division.

While at Fort Bragg, his leave time brought him home to visit family in Tennessee. During this time he met and fell in love with Dewitt Jenkins, a local girl. They were married in 1943 about two weeks before he shipped overseas.

In September 1943, the 101st Airborne shipped out aboard three troop carriers headed to England. The ship carrying Item Company ran into problems and re-routed to to Newfoundland for repairs. Finally, they arrived in England and settled into Chilton Foliate for extensive training and exercises. His unit participated in the Tiger at Slapton Sands on the south coast of England in April. 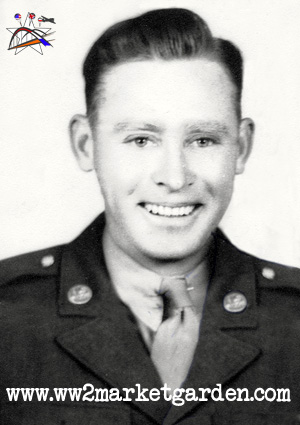 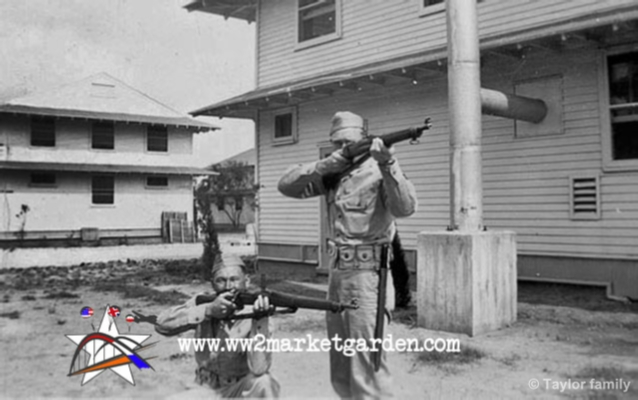 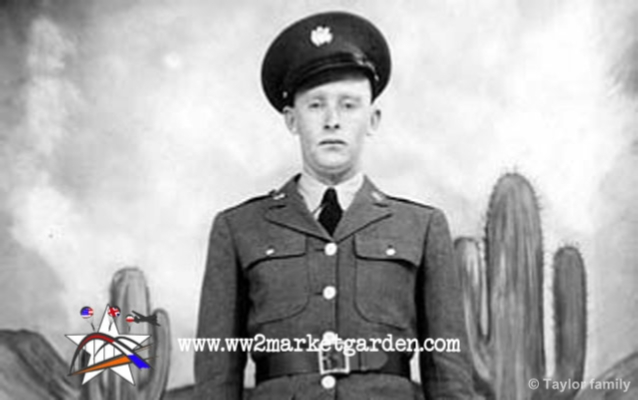 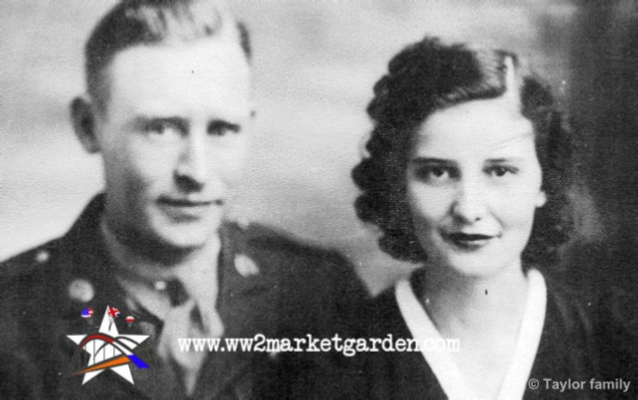 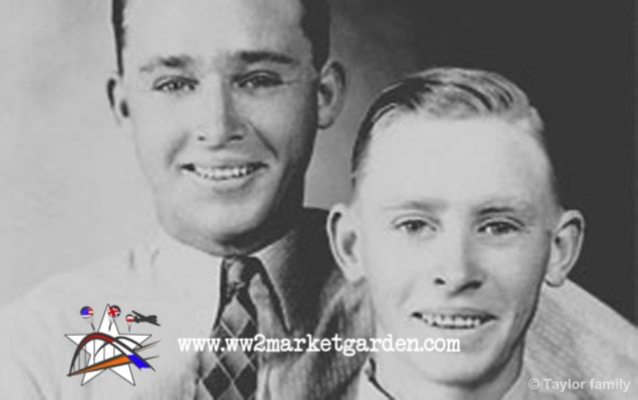 In September 1943, the 101st Airborne shipped out aboard three troop carriers headed to England. The ship carrying Item Company ran into problems and re-routed to to Newfoundland for repairs. Finally, they arrived in England and settled into Chilton Foliate for extensive training and exercises. His unit participated in the Tiger at Slapton Sands on the south coast of England in April.

D-Day, June 6, 1944, Pfc. Lester A. Taylor, Item Company, 3rd Bn, 502nd PIR jumped into Normandy, France. This was a nighttime jump and many planes strayed from their designated drop zones. Lester landed near the town of Saint Germain de Varreville in a flooded canal area. This was an eventful day for him. He was later, posthumously, awarded the Bronze Star medal for his heroic actions in saving the life of a fellow Item Company trooper, John Lackhovic.

The award reads:
‘Corporal Lester Taylor distinguished himself by heroic achievement in action. On June 6, 1944, he landed by parachute in the inundated area near Saint Germain de Varreville, France. Seeing a comrade struggling in his parachute in the canal, Corporal Taylor, ignoring the danger of enemy machine gun fire from nearby positions, and the danger of drowning in the canal, unhesitatingly plunged down the bank into the water and dragged the drowning man to comparative safety of the bank. The furor created by this rescue caused the enemy to fire on the three men engaged in the rescue with mortars as well as machine guns, but disregarding the risk involved, Corporal Taylor continued to render artificial resuscitation to his comrade until he regained consciousness. In a later operation, Corporal Taylor was mortally wounded. His actions were in accordance with highest standards of the military service.’

Pfc. Taylor fought from June 6, 1944 in Normandy south of Utah Beach and along the Carentan Causeway, with the third battalion, 502nd Parachute Infantry Regiment. This causeway became known as 'Purple Heart Lane' due to the huge number of American casualties there.

Item Company and the third Battalion of 502nd PIR was decimated in the fierce fight with the German enemy. Lester was among the fewer than a dozen men standing on June 11th in Item Company. The few men of Item Company were pulled out of action on June 12th since there were no officers nor enough men to form a Company.  A couple days later these men were back in action as part of the other Companies for their remaining time in Normandy.

Lester’s letter home dated June 12th, 1944, says “I believe someone up there has been looking out for me. I am thankful to be alive.”  He wrote home almost every day, at least every two or three days, so the family could tell when he was in combat or under orders to not write home, as happened two to three weeks before secret training exercises and both combat jumps in Normandy and Holland. The next letter was dated June 22nd, 1944, near the end of his time in Normandy.

The first Congressional Medal of Honor in the 101st Airborne Division in World War II was awarded to Lieutenant Colonel Robert G. Cole, the commander of the third Battalion, 502nd PIR, for his heroic leadership in a bayonet charge at Carentan. Lester served with the courageous leadership of Lt-Col Robert G. Cole in Normandy and the Netherlands. 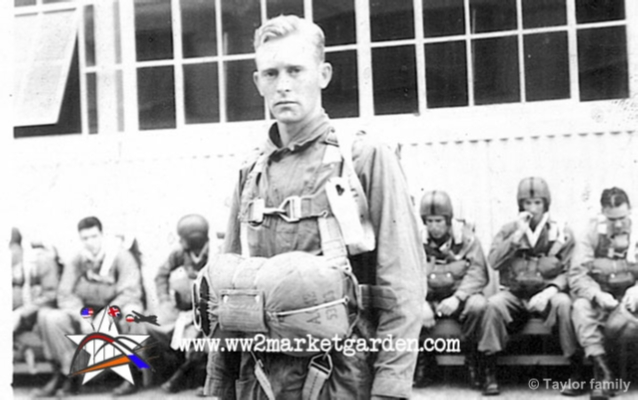 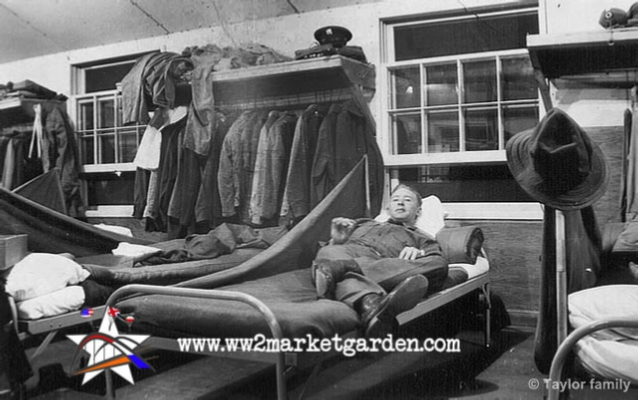 The 502nd PIR left Normandy in July 1944 returning to England via LST’s.  Lester received a promotion to Corporal.  Between July and September, Item Company re-grouped and they were part of the jump in the Netherlands on Sunday, September 17th, 1944, in “Operation Market Garden”. He landed with the 502nd PIR on Dropzone B North-East of Best and North-West of Son, the Netherlands.

Protecting the bridges along the main corridor (later known as "Hell's Highway") through Holland was the main objective of the 101st Airborne in southern part of the Netherlands.

The 502nd Regiment was sent in the direction of Best. Intelligence sources had indicated the enemy population was light in this area. However, that was not the case since the retreating Germans from France were making their way into Holland in huge numbers.  The 502nd Regiment encountered extremely heavy fighting with the enemy in the area around Best. The 3rd Battalion was in the northwest area of the Zonsche Forest east of Best to defend the bridge over the canal  and the highway where the enemy forces were advancing.

On the evening of the 18th, 2nd Platoon of Item Company, 502nd PIR, led by Lt. Robert Burns, received orders from Capt. John Stopka, who had taken over as battalion commander after the death of Lt-Col Robert G. Cole on the same day, to proceed to the highway east of Best and set up a roadblock where enemy vehicles were coming through Best. (This roadblock was near the intersection of the old Eindhoven-Best Highway and the current day bicycle and walking overpass across the new highway.)

Around 10:30 p.m. on the night of the 18th, 2nd Platoon had set up a roadblock and were in position. Around 2:50 a.m. on the 19th a fierce battle took place at the roadblock when enemy vehicles attempted to ram through, but 2nd Platoon held the roadblock. Fierce fighting, said to be some of the worst of the entire Operation Market Garden, continued into the morning of the 19th.

Cpl. Taylor’s squad was separated on the morning of September 19 1944, part on east side of the highway and part on the other. About 10:00 am, he and two comrades made their way to cross the highway to the west side where the need was greatest from the barrage of a hidden German machine gun position. They entered a building , shots were heard and Taylor exited the building mortally wounded, but threw a grenade back inside before he died. A second trooper died at this site. The grenade successfully stopped the machine gun that has his men pinned down on the west side of the roadway at the roadblock near Best. IDPF records indicate Taylor was shot in the head (jaw).

September 2010, Mr. Richard Vaccaro, who was a young 18-year-old Private and machine gunner in Item Company at the roadblock near Best, said that Cpl. Taylor, for a brief time, was in his foxhole with him and his ammunition man on the morning of the 19th. Vaccaro remembers this because at one point the Germans raised the ‘cease fire flag’ so that a medic could aid a wounded German soldier. (a part of War Rules at that time). Pvt. Vaccaro continued to fire his machine gun just a bit longer before stopping, and, then he turned to Cpl. Taylor beside him in the foxhole and said; ‘Sorry sir, I should’ve stopped quicker.’ Taylor patted him on the shoulder and said; ‘You’re just doing your job.’ He said Cpl. Taylor left the foxhole right after that and Mr. Vaccaro remembers nothing about him from that time.

By 11:00 a.m. on the 19th, the German soldiers began to surrender. In the afternoon, Item Company with 3rd Battalion proceeded along the highway toward the canal and bridge which the enemy had succeeded in blowing up earlier, lobbing hand grenades into buildings to clear out the enemy, firing machine guns and mortar rounds. They took out six 88 mm guns stationed between the roadblock position and the Wilhelmina canal. The courageous fierce fighting of the 502nd overcame the enemy and approximately 1,000 German prisoners were taken and the enemy dead were between 400 and 500 during those two days. Fighting continued in the area of the forest and canal. The 3rd Battalion was ordered to the town of Sint-Oedenrode the next day.

Quote from a report of the fighting at Best by S.L.A. Marshall, “One month later, Best was still in enemy hands, and so was much of the ground over which the 502nd Parachute Infantry Regiment had fought in the first days, trying for the town and the bridge.”

September 20, Lester A Taylor’s body was recovered from a “field grave” along the old highway and taken to the temporary Son Military Cemetery at Wolfswinkel. His grave there was “adopted” by a Dutch girl, Dora Vogels, a resident of Son. Dora and her sister, Mien, who adopted the grave next to Lester’s, wrote to the Taylor family in the U.S. until 1948 when the temporary cemetery was closed and the remains moved to the American National Cemetery at Margraten or returned to their hometown in the U.S.A. Easter Sunday in 1948, a military funeral was held in his hometown and Lester A. Taylor was laid to rest in the family plot in Restview Cemetery, Loretto, Tennessee. 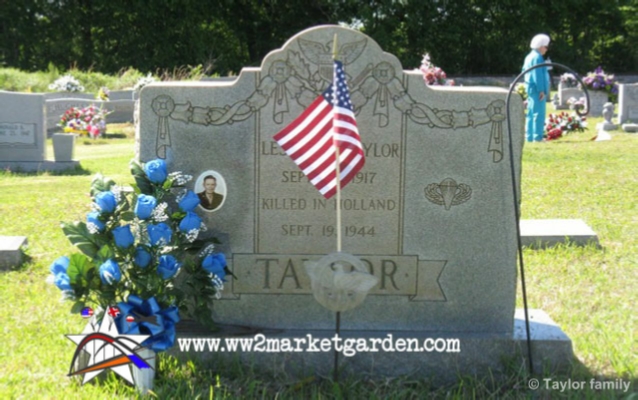 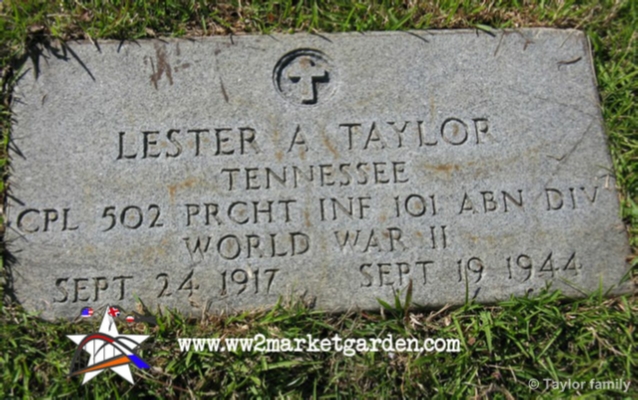 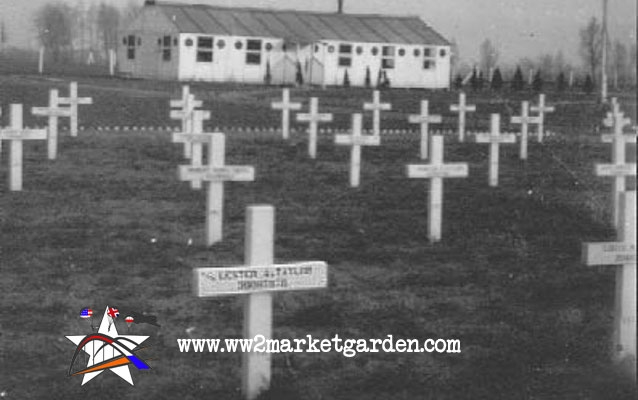 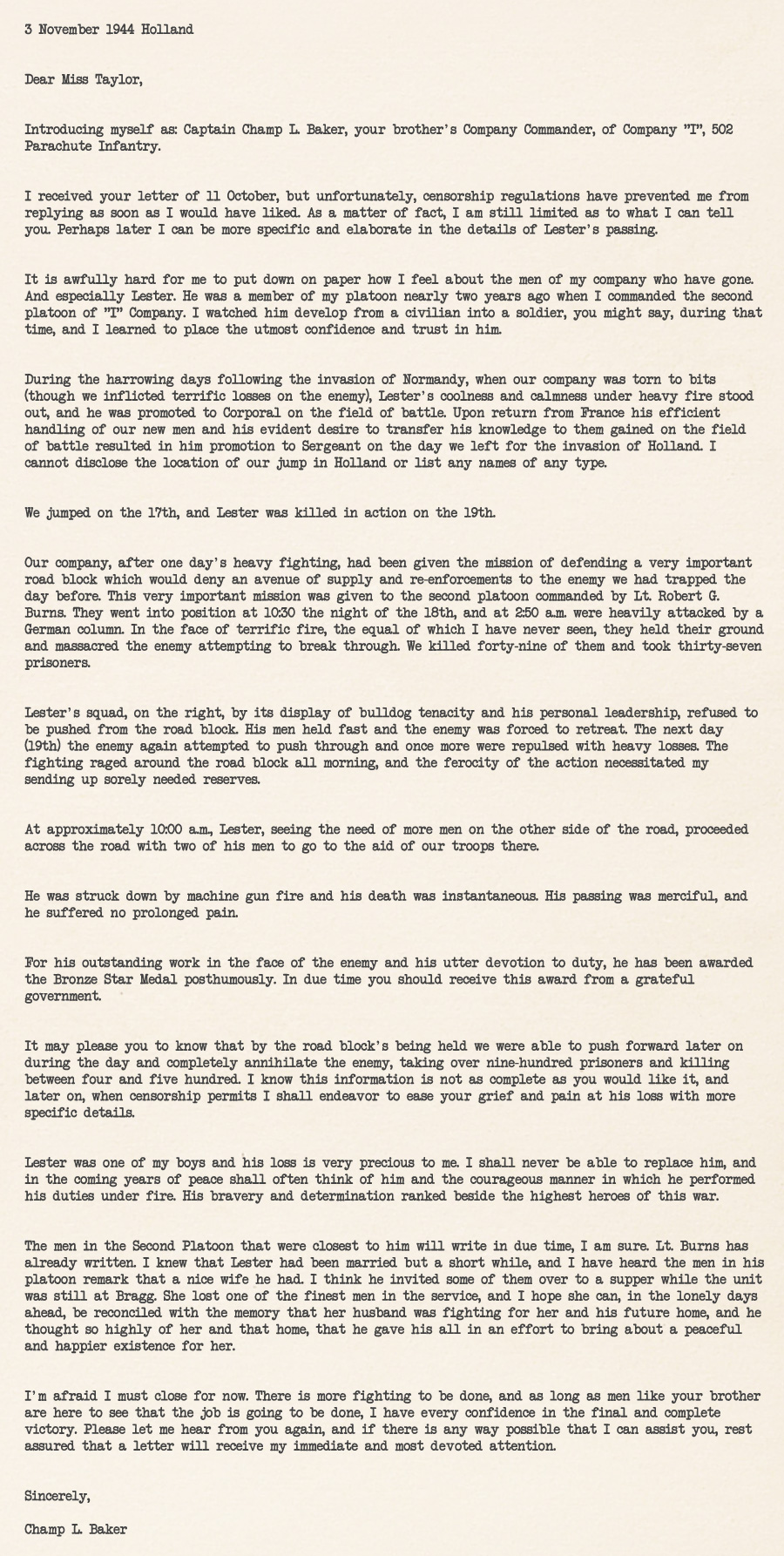 In late 1945, an Item Company comrade , Cpl. Glenn Moe, visited the Taylor family bringing a few of the personal items of Lester’s. From that point, the Taylor family had no contact with his unit or the Dutch girl until April 2001. Through the internet, the help of 101st Airborne Division author and historian; Mark Bando, Steph Leenhouwers and Peter van de Wal from Eindhoven, it has been possible for the Taylor family to unite with the men and families of Item Company and with Dora Vogel’s sister, Mien Lavrijssen in Son. Dora died from cancer in the 1990’s. 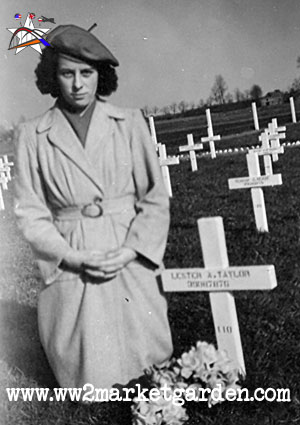