John Hollington Grayburn was born on January 30 1918 in Karachi, Pakistan. He was the son of Lionel Markham and Gertrude Grayburn. When John was still young, the family returned to England where John attended Sherborne School in Dorset. During his school days John was an avid rugby player and boxer and he excelled in both sports. When he finished school he joined the Hong Kong and Shanghai Banking Corporation.

John Grayburn joined the Army Cadet Force in 1940 and was posted to the 1st Cadet Force, the Queen’s Royal Regiment. In September 1940 he was given an emergency commission to 2nd lieutenant and was posted to the Oxfordshire and Buckinghamshire Light Infantry. He was trained at Hatherleigh in Devon. During his service with the Oxfordshire and Buckinghamshire Light Infantry (Ox and Bucks) John earned the nickname “Mad Jack”. In 1942 John married with his sweetheart Dorothy Gertrude Marcelle Chambers with whom he had a son in 1943 called John. John got bored with the service on the home front. His unit was put in charge of homeland defence, but John wanted more acitivity. Following a recommendation from a former collegue at the banking corporation, John joined the Parachute Regiment. In June 1943 John was transferred to the 7th (Light Infantry) Parachute Battalion. During his training with the battalion at RAF Ringway he was described as “an average performer, but an excellent leader, tonic to men”. The following year, right after training, John was transferred to the regiment’s 2nd battalion, under the command of Lieutenant Colonel John Frost. Here he was put in charge of 2nd Platoon A company. 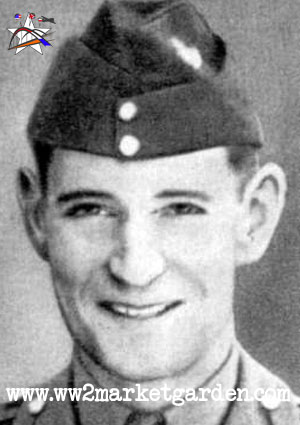 On September 17 1944 Lieutenant John Grayburn geared up for Operation Market Garden. The battalion’s mission was to get to the Arnhem bridge, capture it and hold it until relieved. From September 17 until September 20 John defended the bridge together the platoon he was commanding. Although he was in pain after several wounds to the face and to his back, his courage never flagged. It is likely that because of John’s leadership and bravery that the bridge at Arnhem was held for four days against relentless enemy attacks. Lieutenant John Grayburn died in the night of September 20 at the Arnhem bridge, aged 26 years old. For his gallantry he was awareded the Victoria Cross, the highest military award in the British army.

Lieutenant Grayburn was a platoon commander of 2nd Battalion The Parachute Regiment which was dropped on 17th September 1944 with the task of seizing and holding the bridge over the Rhine at Arnhem.

The north end of the bridge was captured and, early in the night, Lieutenant Grayburn was ordered to assault and capture the southern end with his platoon. He led his platoon onto the bridge and began the attack with the utmost determination, but the platoon was met by a hail of fire from two 20mm quick firing guns and from machine guns of an armoured car. Almost at once Lieutenant Grayburn was shot through the shoulder. Although there was no cover on the bridge and in spite of his wounds, Lieutenant Grayburn continued to press forward with the greatest dash and bravery until casualties became so heavy that he was ordered to withdraw. He directed the withdrawal from the bridge personally and was himself the last man to come off the embankment into comparative cover.

Later his platoon was ordered to occupy a house which was vital to the defence of the bridge and he personally organised the occupation of the house.

Throughout the next day and night the enemy made ceaseless attacks on the house, using not only infantry with mortars and machine-guns but also tanks and self-propelled guns. The house was very exposed and difficult to defend and the fact that it did not fall to the enemy must be attributed to Lieutenant Grayburn's great courage and inspiring leadership. He constantly exposed himself to enemy fire while moving among and encouraging his platoon and seemed completely oblivious to danger.

On 19th September the enemy renewed his attacks which increased in intensity as the house was vital to the defence of the bridge. All the attacks were repulsed due to Lieutenant Grayburn's valour and skill in organising and encouraging his men until eventually the house was set on fire and had to be evacuated.

Lieutenant Grayburn took command of elements of all arms, including the remainder of his own company, and reformed them into a fighting force. He spent the night reorganising a defensive position to cover approaches to the bridge.

On 20th September he extended his defence by a series of fighting patrols which prevented the enemy from gaining access to the houses in the vicinity, the occupation of which would have prejudiced the defence of the bridge. This forced the enemy to bring up tanks which brought Lieutenant Grayburn's position under such heavy fire that he was forced to withdraw to an area further north. The enemy now attempted to lay demolition charges under the bridge and the situation was critical. Realising this, Lieutenant Grayburn organised and led a fighting patrol, which drove the enemy off temporarily and gave time for the fuses to be removed. He was again wounded, this time in the back but refused to be evacuated.

Finally, an enemy tank against which Lieutenant Grayburn had no defence approached so close to his position that it became untenable. He then stood up in full view of the tank and personally directed the withdrawal of his men to the main defensive perimeter to which he had been ordered. He was killed that night.

From the evening of 17th September until the night of 20th September, a period of over three days, Lieutenant Grayburn led his men with supreme gallantry and determination. Although in pain and weakened by his wounds, short of food and without sleep, his courage never flagged. There is no doubt that, had it not been for this officer's inspiring leadership and personal bravery, the Arnhem bridge could never have been held for this time.

Photo: This is 2nd battalion Parachute Regiment Headquarters. In the middle row, fourth from the left we see John H. Grayburn. When this picture was taken, John was fairly new to the battalion. John Frost, who became famous for taking and defending Arnhem bridge, can be seen in the middle of the bottom row.

John’s body was recovered from a ruined building close to the Arnhem bridge in 1948. He was reburied at Oosterbeek war cemetery at plot 13, row C, grave 11. His medals and awards are on display at the Airborne Assault Museum at Duxford, Cambridge, England.