Lionel Ernest Queripel was born on July 13 1920 at Winterbourne Monkton in Dorset, England. Lionel came from a well established and hihgly decorated military dynasty. His father had been a Colonel in the army and was highly decorated for his actions during the Boxer Rebellion in 1900 and his service in the army in Mesopotamia, France and Russia during WWII.. His grandfather and great-grandfather had also served in the army.

Lionel’s career in the army started in the 2nd battalion Royal Sussex Regiment just before the start of World War II. The Regiment was sent to North-Africa and fought in the battle of El Alamein where they suffered a high amount of casualties. Lionel’s battalion was originally chosen to be converted into a parachute unit, but the war office decided otherwise. 200 men from his battalion followed parachute training in the Middle East and qualified for parachute duty. Together they formed the basis for a new parachute outfit: the 10th Parachute Battalion. During this time Lionel was promoted to Captain and got assigned to A Company. The unit returned to the United Kingdom in November 1943 and eventually ended up in the Somersby. In February 1944 Lionel attended a Company Commanders Course at the School of Infantry in Durham.

On September 18, the second day of Operation Market Garden, Captain Lionel Queripel was flown towards Arnhem where together with his men he jumped over Dropzone Y just West of Wolfheze. Because the drop zone was partially overrun by the enemy, the 10th Parachute Battalion had a rough landing. Lionel got his men together and moved out towards Arnhem, where he was able to reach the Arnhem-Rotterdam railroad tracks. The battalion sustained many casualties during the advance.

On September 19 Lionel was commanding a composite company of three parachute battalions when it became split up and pinned down by heavy enemy fire. The enemy had the paratroopers zeroed in. Lionel showed the most persistent bravery during the day. Despite being wounded in the face he carried one of his outfit’s Sergeant back to the Regimental Aid Post under intense enemy fire. When he returned to the frontline, he was able to destroy two enemy machine guns and he captured an enemy anti-tank gun. During another act of bravery he received bullet wounds in both arms, but kept inspiring his men to fight the enemy.

Eventually the positions couldn’t be held against the enemy’s attacks and Lionel made his men withdraw to the Divisional positions. He stayed behind to cover the withdrawel with his pistol and a couple of hand grenades. The was the last occasion on which he was seen. He died on September 19 1944 at the age of 24 and is now buried in Oosterbeek war cemetery; plot 5, row D, grave 8. 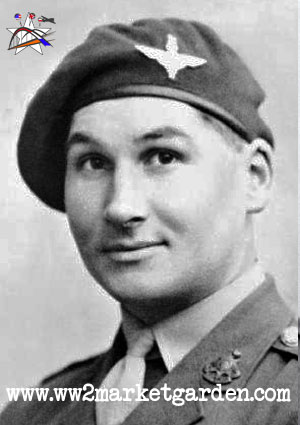 In Holland on 19th September 1944, Captain Queripel was acting as company commander of a composite company composed of three Battalion The Parachute Regiments.

At 1400 hours on that day, his company was advancing along a main road which ran on an embankment towards Arnhem. The advance was conducted under continuous machine gun fire which, at one period, became so heavy that the company became split on either side of the road and suffered considerable losses. Captain Queripel at once proceeded to reorganise his force, crossing and recrossing the road whilst doing so, under extremely heavy and accurate fire. During this period he carried a wounded sergeant to the Regimental Aid Post under fire and was himself wounded in the face.

Having organised his force, Captain Queripel personally led a party of men against a strong point holding up the advance. This strong point consisted of a capture British anti-tank gun and two machine-guns. Despite the fire directed at him, Captain Queripel succeeded in killing the crews of the machine-guns and also recapturing the anti-tank gun. As a result of this the advance was able to continue.

The flanking movement proved fruitless, however, and little ground was gained in what was to be the final attacking action of the 1st Airborne Division at Arnhem. During the evening, whilst the 4th Para Brigade was in the process of transferring its vehicles through a tunnel beneath the railway line, Queripel was given command a composite company, consisting of A Company and men from two other battalions, and was ordered to hold a small finger of woodland to the north-east of Wolfheze, less than a quarter of a mile from the tunnel. This area was vital to the defence and as such it was pressed very hard by the Germans throughout Tuesday night, but the company held it with great valour until early the next morning. The citation continues:

Later in the same day Captain Queripel found himself cut off with a small party of men and took up position in a ditch. By this time he had received further wounds in both arms. Regardless of his wounds and of the very heavy mortar and Spandau fire, he continued to inspire his men to resist with hand grenades, pistols and the few remaining rifles.

As, however, the enemy pressure increased, Captain Queripel decided that it was impossible to hold the position any longer and ordered his men to withdraw. Despite their protests, he insisted on remaining behind to cover their withdrawal with his automatic pistol and a few remaining hand grenades. This was the last occasion on which he was seen.

During the whole period of nine hours of confused and bitter fighting Captain Queripel displayed the highest standard of gallantry under the most difficult and trying circumstances. His courage, leadership and devotion to duty were magnificent and an inspiration to all.